Mentor Steps Up to the Plate 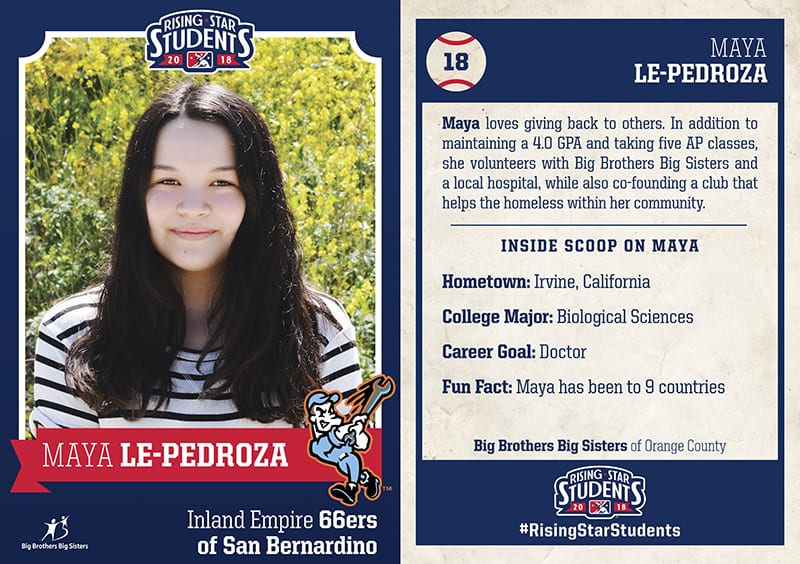 When Maya LePedroza became a high school mentor with Big Brothers Big Sisters of Orange County and the Inland Empire, she learned rather quickly that it wouldn’t be a walk in the park. She struggled early on to connect with her Little Sister, but never lost focus of the ultimate goal: to make an impact on the life of a child in need.

The tireless work ethic she displayed ultimately led to her recognition as a Minor League Baseball Rising Star (MiLB) as part of a nationwide contest in partnership with Big Brothers Big Sisters. The Inland Empire 66ers baseball team honored Maya with a $500 check for college during a special on-field ceremony on June 25. Maya was one of 20 students selected for demonstrating outstanding academic achievement and community involvement.

“I applied to be a MiLB Rising Star because I was interested in being a representative of Big Brothers Big Sisters on a national level. I wanted to showcase the impact that this program had on me,” Maya said. “The experience of being recognized down on the baseball field was a bit overwhelming but also super exciting.”

Her journey as a High School Bigs mentor began with a quiet second-grader named Azul. At first, there was a seemingly unbreakable wall that continuously tested Maya’s confidence. The pair shared few words for their first weeks together—most of which were spoken by Maya. In spite of this, she continued to look for innovative ways to help Azul, from utilizing flashcards for math to rewarding her with M&Ms for completing her reading assignments on time.

And then one day she finally broke through.

Upon discovering that Azul had earned her first high test score, Maya offered her congratulations and expressed just how proud she was of the achievement. In response, Azul showed her something that had been noticeably absent during their time together.

The impact of this particular moment became clear during their next session together. Instead of being met by silence, Maya was greeted with conversation. The disinterest Azul had previously showcased was replaced with a genuine sense of purpose and empowerment. It was during these subsequent conversations where she learned that Azul was a child of two absent parents. For Maya, what transpired in the following weeks was something truly special.

“She was changing. My initial frustration turned into admiration. I was changing. The girl with the big brown eyes became my sister,” Maya said. “Yes, I helped Azul master her multiplication tables. But more importantly, I learned to foster a relationship with someone who felt lost and alone.”

The consistency Maya put in at each session didn’t go unnoticed by her Big Brothers Big Sisters program specialist Nataly Alvarado, who nominated her for the Rising Star contest. Despite Maya’s involvement in other after-school activities, she always remained fully committed to the program.

“Every week I would see Maya asking Azul about her day and finding new methods to help with her homework,” Nataly said. “I’m confident that Maya will continue to do great things and we appreciate the time she has dedicated to our program.”

Even while volunteering with Big Brothers Big Sisters and a local hospital, Maya maintained a 4.0 GPA while taking five Advanced Placement classes and co-founding a club that helped the homeless. Her efforts led to acceptance to UC Berkeley, where she will major in biological sciences in the fall to become a doctor. Although Maya’s experience as a High School Bigs mentor may be complete, she admits her time with Big Brothers Big Sisters is far from over.

“I definitely envision myself becoming a mentor again in the future. I would love to have another Little Sister and foster a new relationship,” Maya said. “Being a High School Big has shown me how important it is to be committed to helping someone else. I also learned how to open up to others, which will allow me to form new meaningful relationships as I embark on my college journey.” 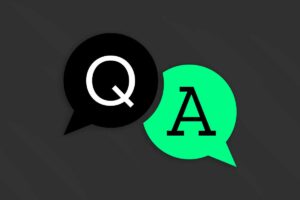 During Pride Month—and every other month of the year—Big Brothers Brothers Big Sisters is proud to support its LGBTQ community. Celebration and inclusion are our 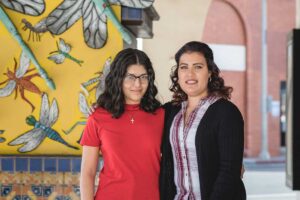 When you volunteer in Riverside County with Big Brothers Big Sisters, you help create generational change in your community—one child at a time. Through Big 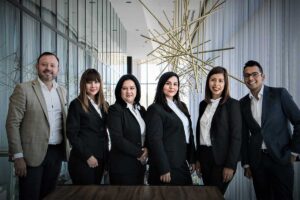 Three Ways to Support Local Youth as a Company

It takes a community—from organizations and volunteers to donors and companies, together—to make a difference. The mission of Big Brothers Big Sisters is to support